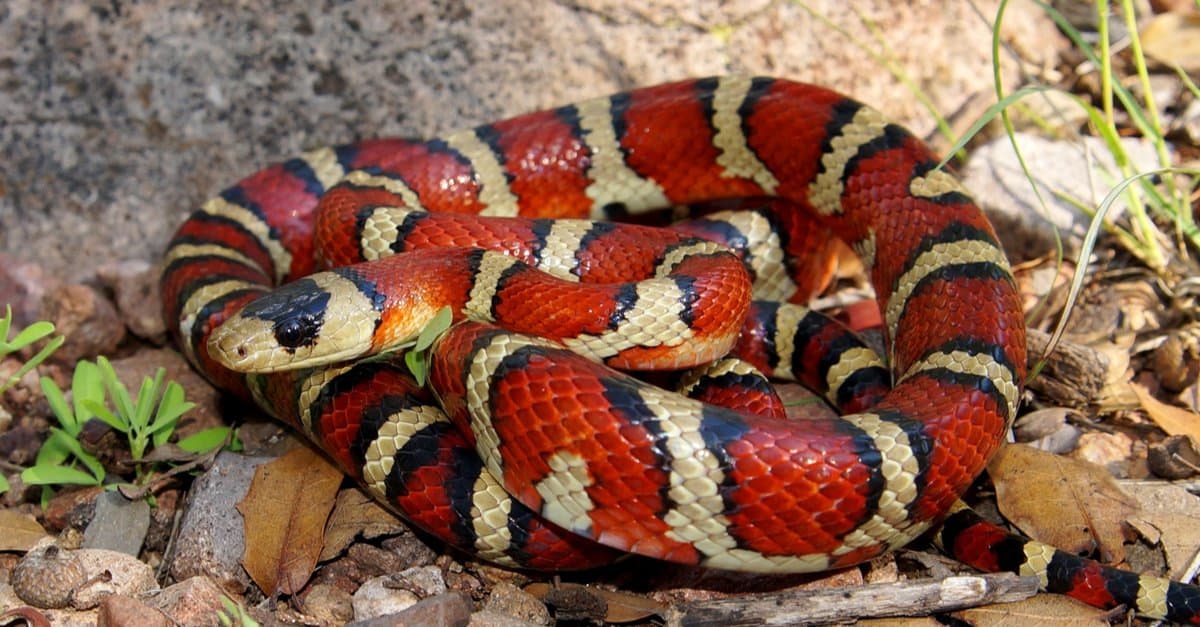 Coral snakes and kingsnakes are often confused for one another and it’s certainly an easy mistake to make given how strikingly similar they are.  After all, they’re both brightly colored and have similar markings, and even live in some of the same habitats.  So, considering how alike they are is it actually possible to tell them apart?  The answer is yes, and there are actually quite a few key differences between them.

For a start, one is deadly and one is relatively harmless, and one is much bigger than the other.  They even kill their prey in different ways, and one is actually a predator of the other.  But that’s not all there is to learn about these fascinating snakes, so join us as we discover all of their differences and exactly how to tell which is the venomous one.

Kingsnakes and coral snakes are both brightly colored and have a striking appearance.  However, their distinctive banded appearance means that they are easily mistaken for one another.  Kingsnakes belong to the genus Lampropeltis which means “shiny shields” in Greek.  There are currently around 9 recognized species of kingsnake and around 45 subspecies.

Although there are some variations between the different species of coral snakes and king snakes, there are still some key differences that distinguish the two types.  Check out the chart below to learn a few of the main differences.

The 5 Key Differences Between Coral Snakes and King Snakes 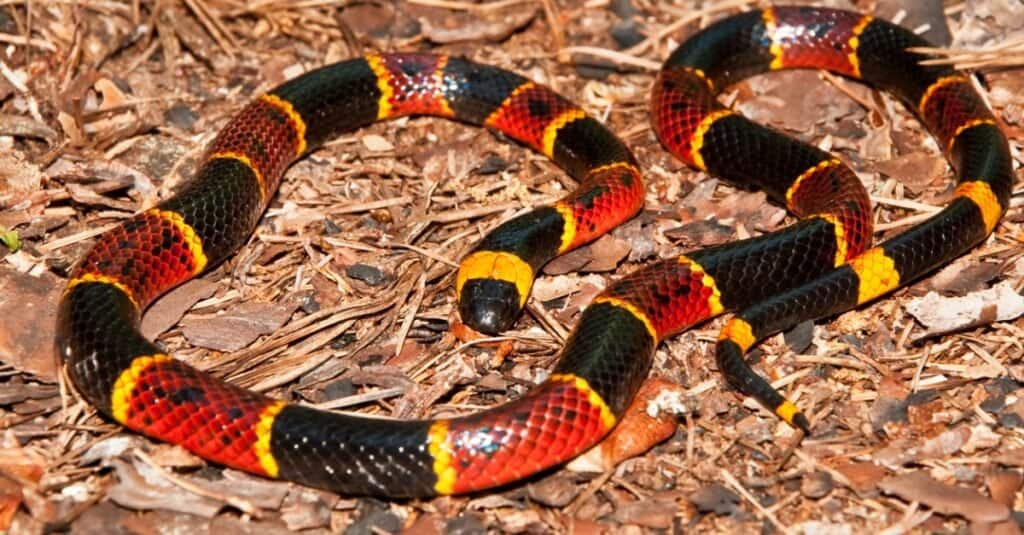 Although kingsnakes and coral snakes often have a similar appearance, there are still some significant differences between them.  Kingsnakes have smooth, shiny scales and are often red, black, and yellow.  The red and black bands usually always touch each other.

One of the biggest, and most important, differences between kingsnakes and coral snakes is their venom.  Coral snakes are highly venomous and have the second strongest venom of any snake.  They have short, permanently erect fangs and their venom contains extremely powerful neurotoxins which affect the brains’ ability to control muscles. Symptoms include vomiting, paralysis, slurred speech, muscle twitching, and even death.

On the other hand, kingsnakes don’t have fangs and are not venomous so are not dangerous to humans.  Their teeth are conical-shaped but are only small, so even a bite isn’t harmful.

There are two groups of coral snakes – Old World (live in Asia) and New World (live in the Americas).  Most coral snakes prefer forest or wooded areas where they like to burrow underground or hide underneath piles of leaves.  However, some coral snakes live in desert regions and these often burrow into the sand or soil.

Kingsnakes are found throughout North America and down into Mexico.  They are highly adaptable and live in a wide variety of habitats – including grassland, shrubland, river valleys, rocky slopes, forests, and desert regions.

Kingsnakes are constrictors and kill their prey by suffocation

Kingsnakes and coral snakes have slight differences in their diet, but one of their key differences is the method by which they kill their prey.  Coral snakes eat lizards, frogs, and other snakes.  As they are venomous snakes they strike their prey with their fangs.  Their fangs inject toxic venom into their prey which paralyzes and subdues them before swallowing it whole.

Kingsnakes eat a range mice, rats, lizards, birds, bird eggs, and snakes.  Some species of kingsnakes even eat coral snakes!  The “king” part of their name refers to them being a predator that preys on other snakes.  Kingsnakes are constrictors and first kill their prey by wrapping their bodies tightly around them until their heart stops from a lack of blood flow.  Despite having teeth, kingsnakes actually don’t use them to chew their food with.  Instead, they swallow their prey whole once they’ve killed it, and use their small teeth to guide it down their throat.

Are coral snakes and king snakes from the same family group?

No, king snakes are from the family group Colubridae which is the largest snake family.  Members of the Colubridae family are found on every continent in the world except Antarctica.  Coral snakes are from the family group Elapidae which are a family of venomous snakes.  Elapidae snakes are characterized by their permanently erect fangs which they use to deploy their deadly venom, rather than having retractable fangs.